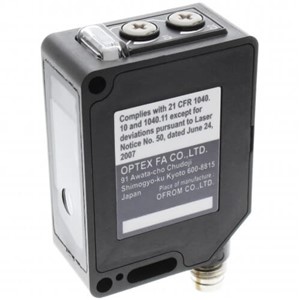 Compact Low Cost Long Distance Background Suppression
Usually long-distance detection sensors are large and heavy. The FASTUS TOF-L Series is a photoelectric sensor with a built-in amplifier that aims to change that. In addition to being the world’s smallest TOF sensor, the TOF-L Series also features a high-sensitivity APD in the light receiving element for high-speed responses of 0.5 ms and maximum detection distances of up to 4.5m.


The TOF method measures the time it takes a pulse-emitted laser to hit a target and return, and the measurement is then converted into distance. With strong resistance to influences from the target’s surface conditions, this method is capable of producing stable detection.


By relying on distance to a workpiece rather than differences in the amount of received light for turning ON/OFF, the TOF-L Series makes it possible to achieve stable long-distance detection with a variety of workpieces, including low-reflectivity targets such as black rubber and glossy targets such as metal workpieces.