Performance and practicality for machine control 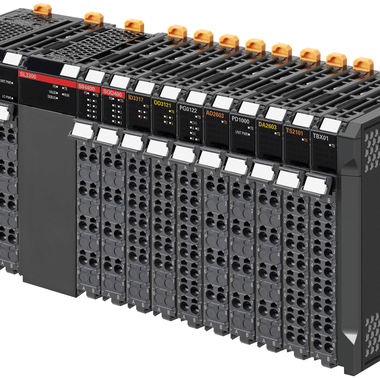 The Omron NX I/O system provides a wide variety of I/O devices. It features an ultra-fast internal bus system that is synchronized with the Distributed Clock of the EtherCAT network. As a result, system-wide deterministic I/O operation allows machine builders to improve machine production rates and output quality.

Omron chose EtherCAT as the control network for the Sysmac NJ Machine Controller series. The convenience of standard Ethernet cabling combined with extremely fast on-the-fly data exchange have resulted in a new machine control architecture. The resulting openness, modularity and determinism are the key elements in today's machine automation.

Since each set of NX-series I/O's on an EtherCAT coupler counts as just a single EtherCAT node, the overall network performance is hardly affected by the number of installed I/O units. Keeping the number of EtherCAT nodes to a minimum will help to keep the refresh cycle times of EtherCAT motion axes as low as possible, even at high I/O counts. Furthermore, local fault or damage to an I/O unit will not affect other EtherCAT nodes down the line. The internal bus of the NX-series is fully synchronised with the EtherCAT Distributed Clock. This assures exact timing of any in- or output unit in the control system to within 1 µs, wherever the I/O units are mounted.

For the design of the NX-series, we used our experience in distributed I/O systems combined with customer feedback.

The NX-series let you mix economical standard I/O's with high-speed synchronous models. The standard digital I/O's have 16 connections per unit, with a choice of:

High-speed I/O's all use 3-wire connection, and have On/Off response times of less than 300 ns. Using the EtherCAT Distributed Clock, all inputs can be latched, and outputs can be controlled synchronously, with less than 1 µs jitter.For even more control over the exact I/O timing, time-stamp inputs will tell you the exact time of each signal transition. Similarly, time-stamp outputs anywhere in the EtherCAT network can be independently controlled with sub-microsecond accuracy.

Input signals from analogue sensors, 4-20 mA transmitters, thermocouples or resistance thermometers can easily be connected and used for monitoring, data logging, trending or PID control. Analogue units are offered with sampling times down to 10 µs per channel and high resolution (1:30,000). Built-in filtering, offset correction, broken wire- and overrange detection are all standard functions. The user can select from 12 different thermocouple characteristics, °C/°F and indication resolution down to 0.01 degree. With up to eight inputs in just 12 mm width, the NX-series are among the most compact modules on the market today.

Various types of encoder signals can be connected, from incremental to Synchronous Serial (SSI) encoders. The ability to synchronize the position data with the EtherCAT Distributed Clock means that the encoder can be used as a motion axis for gearing or following. Pulse outputs up to 500 kHz can be used for discrete control or positioning and can also be mapped as a motion axes when used with the Sysmac NJ machine controller.

Safety control units and safe in- and output units can be added to any NX-series EtherCAT I/O stations, to fully integrate safety and standard control in one network. The NX-series fulfills all safety Performance Levels from PL a to PL e. Since the standard NJ-series controllers (V1.06 and up) and NX-series bus couplers (V1.1 and up) can be used, standard control and safety can be scaled independently.